On R-Day, my first day as a “new cadet” at West Point, back in the summer of 1987, I was taught my four responses. These four responses were to be the only acceptable answers to questions upperclass cadets might ask me for my entire plebe year. I remember somebody much bigger than me in a very stern voice showing me my four responses and giving me the opportunity to recite them from memory until I got it right.

And I still remember them 32+ years later:

Sir/ma’am, I do not understand.

Perhaps not surprisingly, for something so seemingly simple, under the duress of R-Day it took me a couple tries to get it right! Since I wasn’t taking selfies on R-day back in 1987, I’ve included a stock photo below that pretty much captures the gist of my first year of college.

Thus began my plebe year – an extraordinary context based on the premise that you can’t be a leader until you’re a good follower first. And one in which just about every aspect of your behavior and character receive copious amounts of feedback, to put it in the most positive terms.

Physical hazing wasn’t allowed but verbal hazing was the norm, and the smallest mistake or poor decision was noticed by somebody. This gave me lots of opportunities to unlearn the habit of making excuses. Here’s what it would look like:

Upperclass Cadet: ”Cadet Kanis, your shoes look like a dog literally took a shit on them. Did you shine them with a Hershey Bar?  I guess you’re just too good to shine your shoes anymore, huh? You’re better than the rest of us now, right?”  (yelling at me, and inch away from my face, with bad breath, too).

Me: **has a reasonable explanation and attempts to offer it **

Upperclass Cadet:  “NO EXCUSE, SIR, right Kanis? NO EXCUSE, SIR” ** continues hazing me but now it’s no longer about my failure to shine my shoes but about my attempt to make an excuse.

Here’s the thing that’s totally bananas – you’d think I’d figure it out pretty quickly, right? ** JUST SAY NO EXCUSE, Sir!!! ** but I couldn’t make myself do it!! Becuase I had an excuse. It took me a solid 6 to 8 months of my plebe year and plenty of unnecessary suffering to get out of the habit of offering excuses.

For the record I also had a really difficult time “removing that smirk from my face.” Military bearing took a tremendous amount of effort for me and even now I have nothing resembling a poker face! If I think something is funny, I am gonna laugh! But that’s a story for another day.

What would your life be like if you spent zero energy justifying your own behavior or trying to explain to someone how they misunderstood you? I’m not saying don’t apologize and commit to doing better going forward, especially if you’ve caused harm. But I am saying it might be more efficient if nothing else for you to dispense with the habit of making excuses once and for all.

Next time you find yourself wanting to defend your behavior, try “no excuse” on for size and see what happens. You just might free yourself up from a whole lot of wasted energy so you can get on with the important work of making the world a better place. 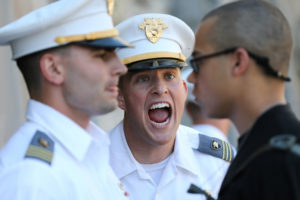 What Percentage of Time Are You Contributing from Your Genius? 💡💡💡

In the summer of 2011, I found myself in a workshop with the Hendricks Institute in Ventura, California. This workshop changed the course of my life and I want to share one of the brightest gems with you.

What brought me to the workshop was that I wanted to fix my relationship with my then girfriend, Christine. We had been together for just over a year and predictably, shit had gotten real. We were caught in a cycle of blame, criticism, and power struggles. Therapy had been no help to us – at least not the therapist we had chosen at the time. This workshop with Dr. Kathlyn Hendricks was a last ditch effort to recussitate our relationship.

The final day of the workshop, we mustered up the courage to approach Dr. Hendricks during a break. With tears streaming down both our cheeks, we told her that we were afraid that we were just too different to be compatible. Katie, as we now know her, registered our concern, put her hands on our shoulders like a coach in a huddle, and reassured us with these words: “You two clearly love one another. You just need to build a bigger corral.”

We wiped away the tears, breathed a collective sigh of relief, and got to work on building that bigger corral. Fast forward to today, we’re living happily ever after, married with two beautiful children and a  cat named Sneakers. In fact, Katie herself officiated our wedding the following year.

As many of us are heading into the Thanksgiving break with various configurations of relatives who put the fun in dysfunction, I thought it might be helpful to pay it forward by sharing Katie’s words of wisdom with you.

How can you build a bigger corral for yourself – the wiggle room to be your most authentic self – and how can you extend that graciousness to others, too?

Lemme know how it goes!

Meanwhile, if you’re bracing for heated debates about religion and politics, two of my favorite podcasts from our first season of Unleashing Social Change might be worth a listen (or re-listen) as you make your way to wherever you’re going:

Andrew Hanauer Director of the One America Movement talks about overcoming polarization.

Cheryl Graeve, National Organizer for the National Institute for Civil Discourse talks about bridging any divide.

And just in case, here is a helpful resource that my wife, Christine, shared with us last week in her Anti-Racism for White People course (now enrolling for 2020):

Rachel Elizabeth Cargle’s “How to Talk to Your Family about Racism on Thanksgiving.”

I just got back from giving a keynote address to the fabulous Missouri and Illinois Community Behavioral Health Conference in St. Louis. They asked me to stay afterwards and do a session, which I was so happy to do. I hadn’t planned anything ahead of time – I just thought a few people would have some questions after the keynote, we’d bang those out, and they could go to a more interesting session.

The breakout room was literally packed! And I am a huge fan of interactive, experiential learning so I had to figure out something fast!

I asked about a half-dozen people in the room what they thought this session was going to be, figuring that might inform my decision with what to do with all these people who’ve come to see me!

Folks popcorned out a wide variety of things they wanted to explore so I decided on the spot to introduce them to a key framework we use as the basis for our two-year fellowship. Basically taking any leadership issue or challenge and exploring how you are showing up in relationship to it. The gist of it is this:

I’ve found that again and again – anytime there’s a glitch in my own attempts to make ripples of positive change in the world – something has gone awry in one of those four areas.

So we did a live case study with an incredibly brave and generous volunteer who is endeavoring heroically to navigate what seems to be a rigid and confining bureaucratic system that’s shaping how behavioral health services are delivered.

In our live coaching interaction, she said something that I think is SO common – so widespread – that we almost take it for granted. Something so common that I want to bring it up here and see if we might loosen this up a little bit for all of us.

She said something along the lines of, “are you asking that question of me, or me in my role?”

And I realized immediately that she experienced daylight between who she is – her essence – and who she believes she has to be to do her job. That they’re not one and the same.

I looked out to the audience – who by the way was captivated by this brave woman’s willingness to learn in public – it really is so interesting when people are willing to do this – I have such mad respect for this woman, and I asked the crowd, “does anybody else feel this way? Like you have to put on a work costume when you go to work and that you can’t be yourself?” And a whole sea of heads bobbed up and down in agreement.

Yup. We put on our work costumes.

Just in time for Halloween…

What are the ways that you feel like you cannot be yourself in your work? Go ahead and name them right now.

I know from my own experience that for 9 years I served in the military before the end of ‘don’t ask, don’t tell’ so I chose to conceal my sexual orientation Every. Single. Day. And it was soul crushing. It’s terrible not to be your true self at work. I get it. And it’s not ok. It’s not sustainable.

Even if you don’t say or do those things, at the very least take a minute and be honest with yourself about what those things are. That’s a start.

Maybe this Halloween season you could find one part of your true self that you’ve been holding back – one authentic communication or action – and just as a small test – see what would happen if you allowed yourself to say/do that one thing (assuming it’s legal, ethical and moral! Don’t get carried away, folks!)

Here’s what I believe in my heart: the work to transform the world is done by real people being true to themselves, taking responsibility for what matters to them, one ripple effect of authentic communication or aligned action at a time. Being true to our roles won’t save the world. Being true to ourselves might.

What’s the worst that could happen?

Bonus points for anyone who sends me pictures of themselves in actual Halloween costumes! That’s me, my wife, and our kids as the “Daniel Tiger Family” last year. Happy Halloween and cheers to liberating yourselves from constraining roles just a little bit this week. 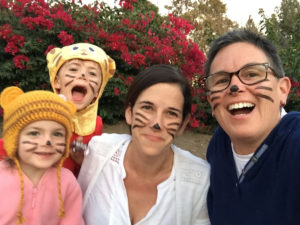