Dispatches from Switzerland (and Italy) ?

I’m on my flight home from two amazing weeks in Europe. The first was on Lake Constanz about two hours east of Zurich where I facilitated a retreat for the Climate Breakthrough Project. I think of the Climate Breakthrough Project as the MacArthur Genius Award (and then some) for some of the most brilliant people working on climate change today. I have to tell you – after spending three days with these folks – both the awardees and the staff and board of CBP – I am feeling more optimistic than ever that we can make a difference on what is one of the greatest challenges of our time.

I met Bruce Nilles with the Rocky Mountain Institute. Previously he led the Sierra Club’s Beyond Coal campaign that played a significant role in preventing 90% of the new coal plants that had been proposed by Cheney’s secret energy task force back in the 00’s and is now well on it’s way to shutting down half of the coal plants in the country – and going for 100%. The bottom line is that coal is bad for everyone, especially the people who live downwind from the plant.

Now Bruce is working to accelerate our country’s transition off natural gas. We all know the dangers of fracking, but what I didn’t know is what a health hazard natural gas is in our own homes. It is not good for you. My takeaway is that we will be transitioning all of our appliances – hot water heater, stove/oven, dryer, and **gasp** our beloved firepit ASAP. We need a new hot water heater anyway, so that’s convenient. But when I asked Bruce how quickly we should prioritize the other appliances – which are rather new – Bruce said, “well, the world needed to be off fossil fuels yesterday, so now would be good.” All righty then. The good news is we went solar a few months ago so once we get off natural gas and get electric cars we will be off the grid minus my flights – which are by far the worst of everything combined.

Also there was a dear old friend, John Hepburn the co-founder of Unfriend Coal in Australia. He’s been working to strip away the social license of the big financial agencies who are insuring coal plants with tremendous success. Imagine you’re a coal company and you go to renew your business insurance – which I’m sure isn’t cheap – and the insurance company says, “oh, sorry, we don’t offer that any more.” That’s what John is up to. And he’s gotten through to all the major insurers in Europe and he’s coming to the US and Asia next. Watch out!

Then there’s May Mei, founder of GoalBlue, who is mobilizing hundreds of thousands of young people in China to eat less beef. Here’s the thing – in China as more and more people enter the middle class and become more affluent – eating beef is a status symbol. And China is doing a phenomenal job of elevating more and more people into the middle class – so watch out cows! But May is brilliantly tapping into social influencers and the youth and making it cool to eat less beef, and with more than a billion people living in China – it really adds up.

Then I met Tessa Khan who is a human rights lawyer from Bangladesh. She learned about a landmark case in Denmark where they successfully sued the government for not keeping faith with their human rights obligations by not adhering to what needs to be done to avert the worst effects of climate change. When Tessa learned about this case a couple of years ago, she decided to devote her entire life to using her expertise as a human rights lawyer to protect the people who will be most negatively impacted by climate change. When it comes to Tessa versus the government – any government- my money’s on Tessa!

Last but not least, I met Yang Fuqiang who is working with the government of China to design a consumption cap on oil, just like he helped them do a few years ago with coal. This is a really big deal and a really big bet. China’s fossil fuel emissions alone are significantly more than any other country on the planet, so their taking a voluntary step to cap it would make a big difference for all of us.

That’s just the awardees. The staff and board of the Climate Breakthrough Project were also each and every one of them extraordinary and brilliant and creative and committed unlike anything I’ve ever seen. They’re willing to make big bold bets and if their bets succeed, collectively it will account for about 10% of the reduction in greenhouse gas emissions that we need to realize as a planet by 2030. I mean – think about it – a small team of folks swinging for the fences to see to it that we’re 10% of the way there on averting the sixth mass extinction. What’s not to love about them? If you want to learn more check out their website.

So yeah, that was a good trip. And my takeaways were this:

(1)   Get rid of our natural gas appliances asap.

(2)   Try an impossible burger. Did you hear that Burger King has caused a worldwide shortage of these wonders of science? It’s happening.

(3)   A question inspired by the people I met: is climate change a technical problem or a spiritual/moral problem? Or both? I think it’s both. Yes – you can look at maps and graphs and substitute this form of water/food supply/energy supply for another and the geopolitics can sort itself out and in some ways it’s almost a no-brainer. All that’s lacking is the will power to do it. It’s not like we don’t know what needs to be done or that the technology doesn’t exist. But it’s also a spiritual/moral problem because the people who need to change are not the people who are most affected by the problem – which means people like me need to really put myself in the shoes of someone from Bangladesh who with rising sea levels will probably not be met at the Indian border with rainbows and unicorns but most probably pitchforks and guns. I just read that the city of Chennai is running out of water. 5 million people. Where will they go? Without a fierce spiritual/moral grounding – a deeply internalized sense of connection to all of the web of life – it’s just way too easy for me to go back to business as usual. How can I embed this into my daily life more firmly?

On a personal note, my family flew to Europe to meet me and we spent a week vacationing in the Emilia-Romagna and Tuscany regions of Italy. I have to tell you – it was the most relaxed I have been eating a meal with our children in the five years since Huck was born. We found remote farmhouses that practice what they call agriturisimo. Everything is farm to table fresh from that farm, even the wine. The food is so ridiculously good I cannot even tell you. I ate my face off in pasta and didn’t feel bloated or gain a pound. Is that just because they don’t use pesticides in their wheat like we do? Whatever they’re doing – it’s magnificent. And the farmhouses had outdoor playgrounds so the adults could leisurely dine in peace for hours while the children played on the swings, merry-go-rounds, and see-saws, zooming back and forth for a bite when they felt hungry. I feel so grateful for a real vacation with my family and wanted to share a picture with you of happy children playing in the fields while we ate our most delicious dinner of our lives. I hope each of you is able to do something rejuvenating and relaxing this summer, too. 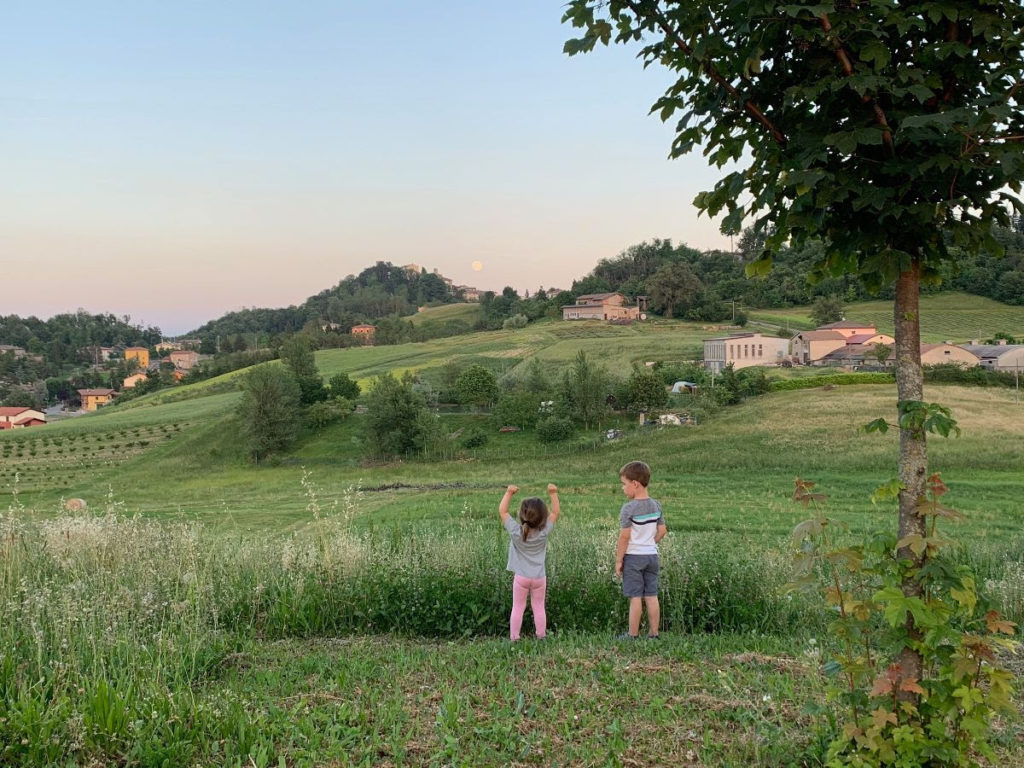