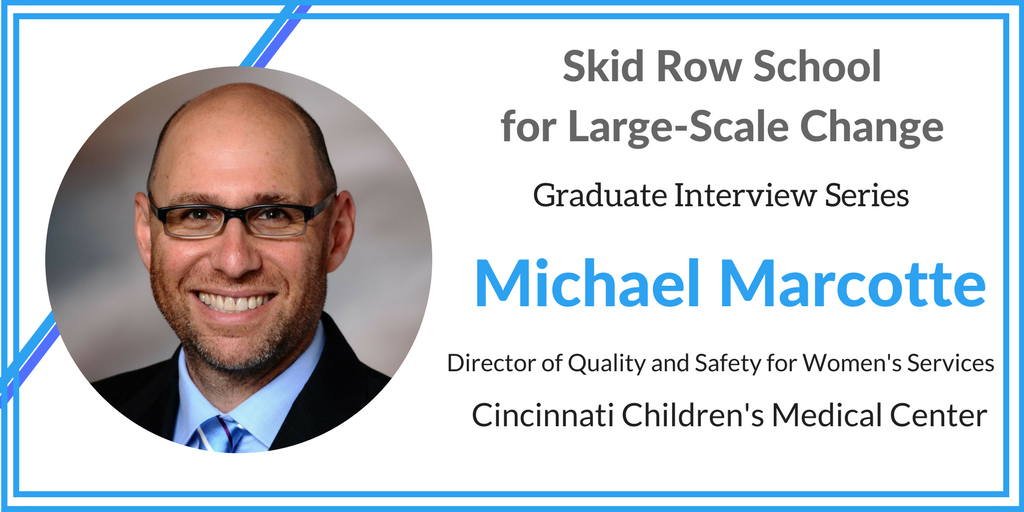 Meet Michael Marcotte. Michael is a maternal fetal medicine specialist in one of the largest Maternity Centers in Ohio–TriHealth as well as the medical director for the HOPE (Helping Opiate addicted Pregnant women Evolve) at Good Samaritan Hospital in Cincinnati.

What is the core/heart of Cincinnati Children’s Hospital’s intervention?

Our intervention is to try to eliminate infant mortality in Cincinnati. Infant immortality is the death of a child from the time of birth up to one year of life. We are trying to eliminate those deaths within that timeframe.

We like to quote Don Berwick “Some is not a number, soon is not a time.” What is your current 18 to 36 month aim?

Our aim is to reduce the infant mortality rate in Hamilton County, Ohio from 9.5 (per thousand) to the national infant mortality rate to 5.9 (per thousand) by December 31, 2020. That translates into 31 fewer infant deaths per year. However, since returning from Skid Row School we’ve thought about changing our aim to be more focused on measuring the transformation of care.

What was the most important take-away for you from the Skid Row School for Large-Scale Change?

The most important take-away from Skid Row School was that I came to the realization that we needed to provide meaningful feedback to the people that we’re trying to help. Primarily, we’re talking about the health care workers and the families who receive care in our 20 different OBGYN centers. For our particular project, we haven’t been giving these groups their data in regards to infant deaths. Dan Heath shared with us that we’ve got to provide them with their data so that they know that a child died that they were caring for. The feedback part was the most eye-opening.

What advice would you give a new leader who really wants to spread/scale their work?

I’d tell them to really be clear about what’s in their control and focus building a team around the moveable/changeable parts that they believe are the key drivers to successfully get to the aim.

What gets you motivated and out of bed every morning?

The desire to create a system in which there can be deep connection for both the people I work with and also the patient and families that we’re interacting with. That became clear to me when I told my Story of Self at Skid Row School. It became even clearer when I told my Story of Self when I returned home. I’m now committed to transforming our system so that it’s a place where deep connection can happen. And, I believe that is the most important key driver in all of the work I do.

How do you recharge your batteries and take care of yourself?

I have a daily meditation practice which is really important to me. It’s like my personal spirituality. And, I also have an amazing family – my wife and daughter are supportive, and I can talk with them about anything. In the past, I’ve done more yoga and more forms of exercise.

If you had three wishes for humanity and the planet, what would they be?